The following was written by former Solvang Restaurant owner Arne Hansen and was published in the Santa Ynez Valley Visitors Magazine in September of 1977. The article was provided by Johanna Welty, former managing editor of the Visitors Magazine.

Aebleskiver! Thanks heavens you don’t have to pronounce it to eat it. What is it? This is probably the most asked question.

Well…… how do you explain it? There are probably hundreds of explanations and I dare say, none of them are correct, including mine. 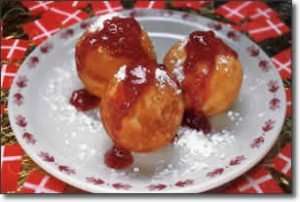 Aebleskiver are a delicacy, supposedly invented by some Dane back in history. They are like a waffle or a pancake formed like a tennis ball. The name makes people believe that there are slices of apples inside, which is correct— if you put apple slices inside! You see, everybody, including me, has their own favorite recipe and way of serving them, all depending from where in Denmark the recipe came from.

You can find them served several different ways in Solvang, CA. The most common way is with powdered sugar sprinkled over them and then topped with raspberry jam. Sometimes people have ventured to ask me how aebleskiver were invented and here I am always at a loss, because it is a very old invention. One theory was Karl Jorgensen’s, former owner and publisher of this magazine, from many years ago. It went something like this:

Back in the good old days, when the Vikings were roaming up and down the coasts of Europe and the waters of the Atlantic, one band of these Vikings had been particularly hard hit in battle, so, when they got back on their ship with their horn helmets and shields all dented and banged up, they decided to have one of their favorite dishes to help them regain their strength —- pancakes!!

In those days they did not have modern conveniences such as frying pans, so, they greased their shields and poured the pancake batter on them over the fire but, guess what!

Now this is Karl Jorgensen’s theory. I like to add a little speculation to this. Suppose this little band of Vikings could have been Leif Ericsen and his men and they were fighting the “braves” at Vinland!! Then aebleskiver were served here in this country over a thousand years ago for the first time. Now, don’t ask me if they served them with powdered sugar and raspberry jam at that time.

At “Danish Days” here in Solvang, which is often referred to as “Aebleskiver Days,” it has been a tradition for local people to set up their giant size pans in the streets and serve them to people from all over, who come and help us celebrate these days. This celebration has been gong on for years and it is getting more and more popular.

Now, incase you have lost the instuctions for making your aebleskiver mix this should help.  Stir 4 eggs and 1 pint of milk together. Add in 1lb (3-1/2 cups) aebleskiver mix and mix well. Let rest 10 to 15 minutes and then cook up your own wonderful hot out of the pan delights!

Make your own Aebleskiver